Defending champions Vic Harris Snooker League took on teams from the surrounding snooker leagues of Saffron Walden, Cambridge, Milton Keynes, Chelmsford, Ipswich, South Beds and Norwich in this annual round robin tournament where teams of 3 players play 2 frames back-to-back against their opposite number from each team.

After 9 rounds of hard match play snooker, the Vic Harris Snooker League successfully retained the title they won last year with 33 points, with Saffron Walden A Snooker finishing as runners up with 30 points. 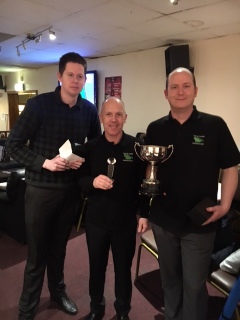 Adam Ingram, Tournament Secretary would like to thank Cambridge Snooker & Pool Centre for providing the venue for the event, Darren Edmonston of Bushwood Accountants for his continued sponsorship the tournament, and Pat Manley and Steve Stalley who did a superb job of keeping account of all the frames won and lost and ensuring the scoreboard was kept up to date. 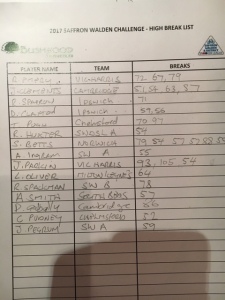