Congratulations to our SWDSL team in winning the first round knock out match of the Harrow & District Snooker League – Inter-League Tournament 7-5 against Goffs Oak Comrades Club.

The team started well taking an early 2-0 lead with Mickey Cushion on form.  Jonathan Wells and Russell Huxter both added to the tally with a frame each to help bring the score to 4-2.  Captain Adam Ingram also produced some good snooker to catapult the team further into the lead and a win looked assured.  But leading 6-2 and only requiring 1 frame for victory from the remaining 4 frames, Graham Driver unexpectedly lost both frames and the match stood at 6-4.  Coming on last, Stuart Turner lost his first frame and Goffs Oak were back in the match trailing 6-5 and needed the final frame to level at 6-6 and to force a deciding frame.  Fortunately Stuart produced the sort of snooker he is more than capable of and powered his way to a convincing frame win to secure a 7-5 victory for the team.  Overall a worthy win for the SWDSL team, well done lads!

We will update the website once the draw has been done for the next round and advise date/venue etc for the next match.

Saffron Walden’s match in the 1st Round is away to Welwyn Garden City [Goffs Oak Comrades Club – 5.30pm start] on Sunday 23 November 2014.  Each team comprises of 6 players [ranked 1 to 6] who each play 2 frames against their opposite number.

For those that may wish to come along and support the Saffron Walden team, please contact Adam Ingram as several cars will be travelling and lifts may be able to be shared.

Champion Of Champions Tournament
The competition shall take the form of a one-day snooker tournament hosted by a different League each year.  Subject to the number of participants on the day, the first round will take the form of a “round robin” of four groups of players, each match consisting of the best of 5 frames. The knockout semi-finals, comprising the winner of each group, will be played over the best
of 5 frames and the final over the best of 7 frames.
Players will toss for choice of break in the first frame of each match and then will break alternately.  The organising League shall supply referees (possibly asking other participating Leagues for assistance).  The organising League may have to make appropriate adjustments to the first round (perhaps even dispensing with the round robin format) if insufficient players attend on the day.  Adam Ingram has been selected by the Committee to represent our league in this tournament.

A copy of the drawsheet, rules for both tournaments and contact list can be found in the Tournaments section in the menu at the top of the website.

As many of you will know entry into this prestigious snooker tournament is by invitation only and all players must be amateurs.  The event is sponsored by Kevin Starr’s company Hexagon Consulting and is being held at Saffron Snooker Club on Sunday 12 October 2014, play commences from 10am.

The Hexagon is now considered to be one of the three most important amateur events in England, along with the EASB English Amateur Championship and the Snookerbacker Classic.

The event starts at 10am this Sunday, so please get yourself down to Saffron Snooker Club to show one of our league members Kevin Starr your support, along with our league players, and I promise you are sure to see some top class snooker.

Team Captains – please click the link below to enter your players into the Handicap Singles, Handicap Doubles, Scratch Plus Singles and Scratch Singles tournaments.   The 2014/15 Season Calendar is available to view on the league website and it is imperative that entrants are available to play in all rounds of the tournament(s) [including semi finals and finals] that they enter.  All entries must be received no later than Sunday 28 September 2014.

Please contact the Tournament Secretary, Adam Ingram on 07901-723360 if you need any further information.

The draw for the League Cup Semi Finals is detailed below, all spectators are welcome to come along and watch these matches unfold. The format remains as previous rounds, 4 players playing 1 frame each and if it is 2-2 after the 4 frames, then each team captain nominates one of their players to play a sudden death play off frame for a place in the final.

As these matches are being played at a neutral venue, no team has home advantage or the advantage of choosing who plays who, so at the start of the match, each team should write down their order 1,2,3,4 on a separate piece of paper and then turn them over and the referee should then write out the match card.

Just a reminder that all Quarter Finals Round matches in the Handicap Singles, Handicap Doubles, Scratch Singles & Scratch Plus Singles must be played by Monday 31 March 2014.

Please text results promptly to Adam Ingram so the drawsheets for the Semi Finals can be finalised.

The dates for each semi final match are on the league website.  As these matches are to be played on a neutral table, venues will be confirmed in due course following the completion of the quarter finals.

Don’t forget that all Last 16 Round matches in the Handicap Singles, Handicap Doubles, Scratch Singles & Scratch Plus Singles must be played by Friday 28 February 2014.

Please text results promptly to Adam Ingram so the drawsheets for the next round can be finalised.

The Quarter Final Rounds for all Singles and Doubles Tournaments will be held during March.

February 2014 Newsletter
League
No sooner have we started the second half of the season, once again it is disappointing that some team captains are continuing to be persistently late in texting their results and posting their results cards. As a consequence, the Committee will be proposing for a new rule to be included in the league rules for next season to deduct penalty points from offending teams. Currently the league table for last week cannot be finalised due to results still awaited.
So for the rest of this season until this matter can be resolved at the AGM, please could BOTH Team Captains text Adam Ingram and Cathy O’Neill the match result (or use the free online submission form on the league website) following the conclusion of each league match. If you are a member of our Facebook Group, please also post on there so players can see the other teams results. Thank you.

Tournaments
The last 16 rounds of the Scratch Singles, Scratch Plus Singles, Handicap Singles and Handicap Doubles are now in progress, and all matches are due to be arranged no later than Friday 21 February 2014 and played by Friday 28 February 2014. All drawsheets can be found on the league website. Should you have any issues trying to contact your opponent then please advise the Tournament Secretary, Adam Ingram on 07901-723360.

Snooker Etiquette
The Committee would like to remind all registered league players that whilst playing and refeering during league matches and tournaments that there is a level of etiquette expected which makes snooker the gentleman’s sport that we all love to play. To view our recent post on this subject, please click link below;
https://swdslnews.wordpress.com/2014/01/26/snooker-etiquette-a-few-reminders-pointers/

The annual handicap event was well supported with a strong field of 37 league players in attendance, all hoping to win the first prize of £60 and be the 24th name engraved on the President’s Cup.

With all matches being the best-of-3 frames, by late afternoon the quarter final stage was played out as follows;

In the semi finals, Steve Parradine took on Emma Simmons in the first semi final giving a 52 headstart, whilst Jack Bothwell had a 4 point headstart against Simon Chapman.  After a long battle between Emma and Steve, the two in form players on the day, Simon and Emma both came through their semi’s with 2-0 wins to meet in the final.

With Simon giving a 44 headstart in the best-of-3 final, it looked like after a long day on the green baize the advantage of having the points on the scoreboard at the start of each frame could be enough to pull Emma through to the winning post, but Simon held his nerve and concentration to score heavily enough to battle through to win the President’s Cup 2-0 and collect the £60 first prize, with Emma receiving the consolation of the £30 Runners Up prize.  Both of the losing semi finalists each received £15.

In reaching the final, Emma become the first female league player to reach a league tournament singles final in 16 years, and only the second in the leagues 52 year history, a fantastic achievement, well done Emma!

Those players who got knocked out in their first playing round got a free entry in the Plate Tournament with one frame being played in each round including the final.  The semi finals lined up with Nigel Ginn (+12) taking on Phil Chapman (+12), and Joe Fanthorpe (+34) taking on Aaron Gibson (-4).  League team mates Joe and Nigel made it through to the final, and it was Joe, pushed all the way by Nigel who continued a fantastic run of form on the day to not only win, but retain the tournament he won last year and collect the £20 first prize.  Nigel received the £10 prize as plate runner up.

Adam Ingram’s break of 78 secured him the £10 Tournament High Break prize.  See below for all the recorded breaks over 25.

For those that didn’t manage success on the snooker tables, a chance to go home with a raffle prize still offered some consolation, and just before the quarter finals the draw took place.  Prizes included boxes of luxury chocolates, a slow cooker, 3 bottles of red wine, 3 bottles of white wine, a case of Stella Artois, and case of Fosters, various bitters and ciders, as well as a selection of beauty products, Ronnie O’Sullivan’s latest book, and a wireless mouse.  With impending cold weather on the way, the very useful booby prize was a de-icer and ice scraper set won by Richard Malyon.

Photos of the winners and runners up are on the SWDSL Facebook Page, and all trophies will be presented at the Annual Presentation/Finals Evening on Saturday 17 May 2014 at Saffron Snooker Club.

The Committee of the DMC Leisure Saffron Walden and District Snooker League would like to thank Bullet Brickwork UK Ltd for their continued sponsorship of our flagship day tournament, Saffron Snooker Club for providing the venue, and Mark Cooper for preparing the tables and refereeing the final.  Thanks also to Tournament Secretary Adam Ingram, Peter Saville and Stewart Hart for ensuring that the tournament ran smoothly on the day. 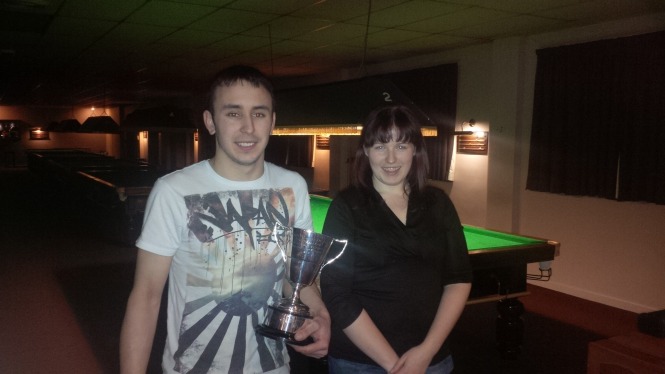 Don’t forget that all Last 32 Round Scratch & Scratch Plus Singles matches must be played by Monday 27 January.  Please text results promptly to Adam Ingram so the drawsheets for the next round can be finalised.